The lymphoma symptoms you experience and the type of treatment that is best will depend on your lymphoma type and its severity. Lymphoma treatment most often involves immunotherapy medications, chemotherapy, radiation therapy, a bone marrow transplant, or a combination of all of these.

Experiencing one or more of these lymphoma symptoms does not necessarily mean that you have lymphoma. For the most part, many of these symptoms are more likely to be caused by other issues, such as an infection. Still, if you are suffering from any of these symptoms it is important to have them checked by a doctor so the cause can be found and treated if necessary.

Lymphoma is a type of cancer that starts in the infection-fighting cells that reside in the body’s immune system. These cells are known as lymphocytes and are most commonly found in the lymph nodes, spleen, bone marrow, thymus, and other parts of the body. When an individual has lymphoma, their lymphocytes can quickly mutate and grow out of control.

There are two main types of lymphoma that individuals are commonly diagnosed with:

Non-Hodgkin’s lymphomas begin when a type of white blood cell, known as a T cell or a B cell, mutates and becomes abnormal. The cell begins to divide rapidly, creating even more abnormal cells in the body. As the cells divide and grow, they spread to almost every part of the body. Most of the time, doctors are unable to say for sure why one person gets non-Hodgkin lymphoma and another does not. Often those with a weakened immune system are at an increased risk of developing lymphoma symptoms. 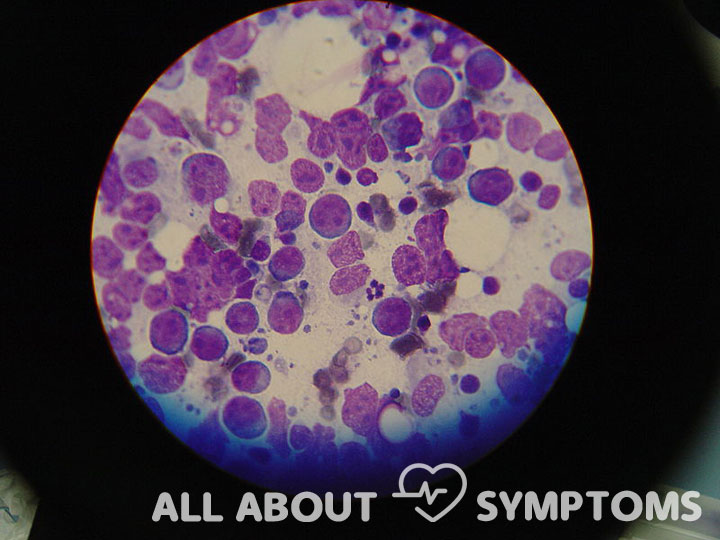 Lymphoma affects the lymphatic system of the body, causing symptoms to occur.

One thing to keep in mind as you study lymphoma symptoms is that lymphoma is different from leukemia. Though the two are often confused, each of these cancers actually begins in a different type of cell. Lymphoma cancers start in the infection-fighting lymphocyte cells. Leukemia starts in the blood forming cells that exist inside of the bone marrow. Additionally, lymphoma is not the same as lymphedema, which is a collection of fluid that can form in the body’s tissues when damage or a blockage occurs.

When you experience any lymphoma symptoms always contact a doctor, even if you believe that the symptoms may be the result of a more minor illness. In all cancers, early intervention is key. The earlier stage cancer you are diagnosed with, the better your chances of making a full recovery.

As of now, there is no definitive cause for lymphoma. It is known that lymphoma can develop when the white blood cells known as lymphocytes grow out of control. Typically, this has been attributed to genetic changes that occur in the cells that mean they no longer “listen” to the signals that control their growth and eventual death.

The main risk factors for lymphoma seem to be problems with an individual’s immune system. This is different from other forms of cancer where lifestyle factors typically play a large role in the development. Anything that can increase your risk of a certain condition is deemed a “risk factor.” Having one or more risk factors for lymphoma does not necessarily mean you will develop the condition at some point in your life. It simply means that you are more likely to develop lymphoma symptoms than someone with no risk factors at all.

For the average person, the risk of developing lymphoma is quite small. Even with risk factors, the likelihood is minimal.

Risk factors for lymphoma include:

While risk factors do not necessarily lead to a lymphoma diagnosis, they are things that you should keep in mind. If you are experiencing any lymphoma symptoms it is recommended that you see a physician as soon as possible. While most of the time your symptoms will be traced back to a more minor illness, it is always best to air on the side of caution and examine potential causes before it’s too late.