For most people, recognizing the symptoms of COPD isn’t easy until later stages of the disease. Sometimes it’s easy to discount feeling short of breath or being unable to go about normal activities because they are simply attributes of “getting older.” In reality, these symptoms aren’t to be taken lightly and shortness of breath can be a vital symptom of lung disease.

COPD bears many symptoms. COPD symptoms typically include: chronic cough, shortness of breath while doing everyday activities, blueness of the lips or fingernail beds, chronic fatigue, producing lots of mucus, wheezing, and experiencing frequent respiratory infections. If you experience any of these symptoms, you may be suffering from COPD. It’s important to discuss any signs or symptoms with your doctor early on.

You may recognize a few symptoms of COPD, but are you aware of what COPD is? Chronic obstructive pulmonary disease, or COPD, is a group of very progressive lung diseases. The most common being chronic bronchitis and emphysema. Since individuals suffering from COPD symptoms will experience symptoms of both conditions, health professionals will simply refer to the disease as COPD rather than diagnosing each ailment individually. When an individual has COPD, the airways of the lungs can quickly become inflamed and thicken. During the process, the tissue where the oxygen is exchanged is also destroyed.

With COPD, the flow of air in and out of the lungs decreases, making it more difficult for oxygen to reach your body’s tissues. This in turn makes it more difficult for the body to get rid of the waste gas carbon dioxide. As the disease progresses and worsens, shortness of breath can make it harder for those suffering from the condition to remain active and engaged in daily activities. In emphysema, the very tiny and delicate air sacs in the lungs are effectively damaged. The walls of the air sacs will become very stretched out and the lungs will actually get bigger.

This makes it more difficult for air to move in and out. Old air will get trapped inside of the sacs, leaving little to no room for new air to go. In emphysema it is hard to get oxygen in and get carbon dioxide out. Many individuals suffering from COPD symptoms are initially diagnosed with emphysema, they may also be diagnosed with chronic bronchitis. Chronic bronchitis is an inflammation of the breathing tubes inside of the lungs. The airways are lined with tiny hair like structures known as cilia that work to sweep mucus up and keep your airways clean and free of debris.

When the cilia are damaged, they can’t keep the airways clean and it becomes much more difficult for one to cough up mucus and expel it from the body. This can lead to swelling of the airways. The change in the limit of airflow in and out of the lungs makes it difficult to breath, one of the tell tale signs of COPD. Unfortunately, there is no known cure for COPD, but treatment can help to alleviate COPD symptoms and lower your risk for complications. Oxygen therapy, surgery, and medications are all common forms of treatment for COPD. 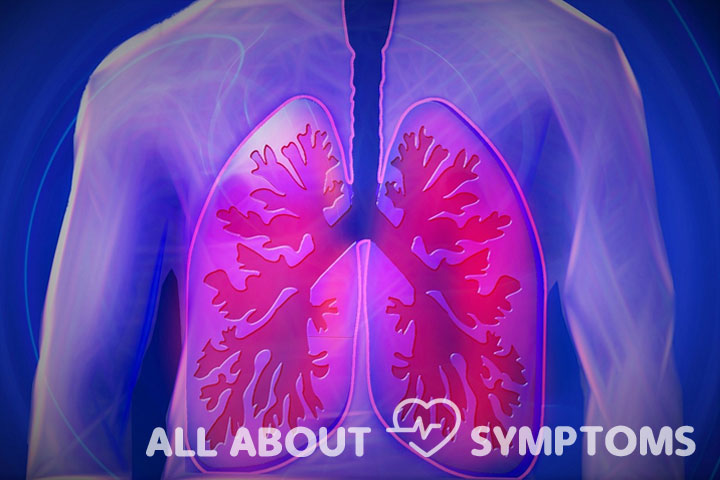 COPD is a lung condition that is often characterized by shortness of breath and chronic cough.

COPD is believed to be caused by exposure to irritants that may damage the lungs and airways. Researchers have determined that the main cause of COPD is smoking, though non-smokers can also be diagnosed with COPD. About 90 percent of all individuals suffering from COPD symptoms were smokers. When a cigarette burns, it effectively creates more than 7,000 different chemicals, many of which are quite harmful to the human body.

Not only can the toxins in cigarettes leave you more susceptible to certain types of cancers, they can weaken your lungs’ defense against infections, tighten the air passages, swell the air tubes, and destroy the body’s air sacs. These are all contributing factors to COPD symptoms. Of course, smoking is not the only cause of COPD and individuals who don’t smoke can also be diagnosed with the disease. Many individuals who are eventually diagnosed with COPD will cite environment as the primary cause. What you breathe in and out while at home or work can play a major role in developing COPD.

Being exposed to secondhand smoke and dust, fumes, chemicals, and air pollution can all cause the condition to develop. If you’re someone who works in an environment where lots of dust or irritants are present, always wear a face mask or respirator in order to reduce your risk of COPD. In addition to smoking and environmental causes, COPD can also be caused by Alpha-1 deficiency. A small number of people who experience COPD symptoms are diagnosed with a rare form of COPD known as alpha-1 deficiency related emphysema. Unlike a traditional case of COPD which is often caused by environmental factors, this form of COPD is caused by a genetic condition that affects your body’s ability to produce the protein alpha-1.

Alpha-1 is highly important because it works to protect the lungs. If you’re experiencing symptoms of COPD always seek the advice and care of a medical professional. A doctor will guide you on the path to wellness and help you to achieve a higher quality of life. While there is no cure, there are treatments available to help manage symptoms and alleviate any pain or stress involved with a COPD diagnosis. Always examine your health carefully and know when it’s time to see a doctor.