Acid reflux symptoms occur when the contents of the stomach are repeatedly pushed back up into your esophagus. The symptoms you experience will depend upon which organs are affected by the stomach acid. Not everyone who is diagnosed with acid reflux will experience the same symptoms or even the same severity of symptoms. Those with acid reflux will often state that their symptoms can range from very mild to severe or debilitating.

The most common symptoms of acid reflux are:

Heartburn is by the most common symptom of acid reflux. Your stomach is typically protected from the corrosive acids that can occur within the body.. If your low esophageal sphincter isn’t working properly to prevent stomach acid from leaking out of your stomach and up into your esophagus, you will most definitely experience a painful burning sensation in your chest. Dyspepsia is another common symptom of acid reflux.

Essentially dyspepsia is a general term used to describe stomach discomfort. Symptoms of dyspepsia include:

Those with acid reflux may also experience regurgitation. This is the feeling of liquid, food, or bile moving up your throat rather than down as it should. In may cases regurgitation can even lead to vomiting. Vomiting due to acid reflux is quite rare in most adults. Though acid reflux can occur at any time of the day, most people tend to experience their symptoms at night. The reason? Lying down can make it easier for acid to move from the stomach up into the chest, thus exacerbating acid reflux symptoms.

What is Acid Reflux?

Food and dietary habits are said to be one of the leading factors of acid reflux, though many things can cause or exacerbate symptoms. Some food habits linked to acid reflux include: caffeine, alcohol, high intake of table salt, a diet low in dietary fiber, eating very large meals, lying down within 2 to 3 hours of eating a meal, carbonated drinks, acidic juices ,and consuming large amounts of chocolate. While diet is just one piece of the acid reflux puzzle, eliminating certain foods and drinks from your diet may alleviate symptoms and allow you to enjoy a greater quality of life.

You should always see your doctor for testing if you find yourself taking antacids everyday, experience acid reflux more than twice a week, and have symptoms that have significantly altered your lifestyle. Seeking medical attention is important because frequent acid reflux can indicate GERD (gastroesophageal reflux disease). This is a chronic and more severe form of acid reflux that could lead to serious complications if left untreated. 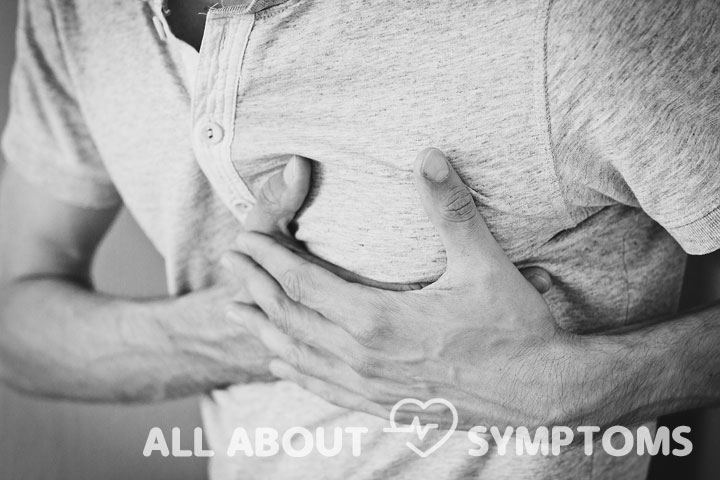 Those with acid reflux will often experience a burning sensation or pain in the chest region.

What causes acid reflux symptoms? Doctors have determined that acid reflux occurs when the acid content of the stomach incorrectly flows back up into the esophagus, or the gullet, which moves food down from the mouth. Though acid reflux is commonly marked by heartburn, the disease has nothing to do with the heart. The namesake comes from acid reflux symptoms such as chest pain and burning in the chest area. Acid reflux is largely regarded as a condition of the esophagus and stomach. The stomach contains hydrochloric acid. This is a strong acid that is designed to help your body break down food and protect you from foreign or harmful pathogens such as bacteria.

As you might imagine, this acid is strong and caustic, which can cause discomfort when it sneaks back into the esophagus from the stomach. While the lining of the stomach is well adapted to this acid, the esophagus is not protected nor is it meant to be. A ring of muscle known as the LES normally acts as a valve that lets food into the stomach but not into the delicate esophagus. When the valve fails, stomach contents are regurgitated back into the esophagus. This is when acid reflux symptoms such as heartburn are felt. Acid reflux symptoms can affect individuals of all ages, often for reasons that are unknown.

Most often, symptoms are attributed to lifestyle factors, though they can also be due to causes that cannot be prevented. One example of a non-preventable cause is a hiatal hernia. This is a hole in the diaphragm that permits the upper part of the stomach to enter into the chest cavity, most often leading to GERD or acid reflux symptoms. Controllable risk factors that may be prevented include: obesity, smoking, low levels of physical activity, medications, drugs of asthma, calcium channel blockers, antihistamines, painkillers, sedatives, and antidepressants.

Making changes to when you eat and how you eat can also prevent symptoms of acid reflux. Rather than eating three large meals a day eat several smaller meals more often. Often times eating too much at once can cause acids of the stomach to back into the esophagus. If you are experiencing any acid reflux symptoms it is always recommended that you seek the help of a doctor or medical professional. While being aware of your symptoms and the causes is important, only a doctor can draft a treatment plan that is tailored to your lifestyle. Always keep a watchful eye on your health and seek medical treatment whenever symptoms of illness or disease present themselves.